Hostwriter Featured on the Blog of Deutsche Welle Adakemie

(This article originally appeared on the blog of the DW Akademie on 11 April 2014.)

You’re planning your next overseas assignment. You’re looking for strong story ideas, good contacts with expert local knowledge, and maybe a couch or bed in the spare room of a journalist-friendly house to keep travel costs down. If this sound familiar, then the soon to be launched international journalism network called hostwriter might be an answer.

Hostwriter is the brainchild of German journalists Tabea Grzeszyk, Tamara Anthony, Sandra Zistl. The pitch is simple: find a story, find a colleague, find a couch.

The aim of hostwriter is to create a network of professional journalists around the world who can help each other, share information and contacts, collaborate to produce stories together, or even let a colleague stay in their home.

Tabea Grzeszyk is a freelance broadcast journalist based in Berlin and contributes stories to German public radio and television. One of the inspirations for developing hostwriter was her experience of “couch surfing” during a research trip through Turkey, Lebanon and Syria. She recalls that living with a young family in Damascus, in a neighborhood that was also home to Iraqi refugees, gave her a much more immersive experience of Syria by getting closer to people.

“I understood a lot more than if I would have stayed in a hotel,” says Grzeszyk.
Tabea Grzeszy says hostwriter fills a gap: “I’m a freelance journalist and I want to use it!” 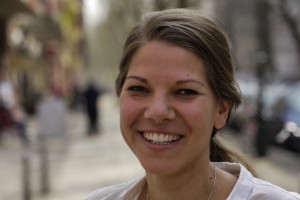 By adapting the couch surfing idea to a professional journalistic context, Grzeszyk sees that there is an opportunity for visiting journalists to do stories “with people, instead of about people”.

The founders also see that hostwriter could serve as valuable social network for journalists. For example, to quickly identify journalists in countries to be interview partners, fixers, producers, photographers or translators – especially during breaking news events.

And while news journalism is by its nature competitive, Grzeszyk hopes hostwriter could be a way to help colleagues either from different countries or from different media or editorial sections to work together – for example sharing interview partners, traveling together or even producing a story together.

The hostwriter network will be free to join. And, rather like applying for many journalist associations, new members will be obliged to offer evidence that they are professional journalists.

On the platform journalists can create their own profile with their country, town and area of expertise. And like Facebook or LinkedIn, they can list preferences for what they are prepared to offer – from simply helping colleagues with information and contacts to hosting a journalist to being open to doing joint research.

Grzeszyk says the hostwriter platform provides the infrastructure for members to search for and contact journalists in the network. Data security she says will be taken very seriously. Contact details of hostwriter members will not published.

So far German journalism organizations such as DJV and netzwerk recherche as well as Reporters without Borders have lent their support to the project.

If you’ve ever read Tom Rachman’s brilliant journalism inspired novel, The Imperfectionists, and chuckled (and cringed!) at how the egocentric war correspondent Rich Snyder literally parachutes into the life of Cairo stringer Winston Cheung and helps himself to poor man’s apartment and computer, then that’s definitely not in the spirit of hostwriter.

Members of hostwriter will have to observe a code of ethics to use the platform. Grzeszyk says there’s a shared responsibility in being a member. Violations of the code can be reported to hostwriter.

Of course a network is only as good as its members. It will be interesting to see how hostwriter evolves and if it will attract journalists who are interested in not only using the platform to search for assistance, but are willing to reciprocate and offer assistance themselves.

Already hostwriter have signed up journalist Ambassadors in several countries and cities to help spread the word.

The public beta of hostwriter is due to be launched in Berlin during the re:publica14 conference in May.