One thing I know for sure: Without local contacts or fellow journalists, you´re kind of lost in Lebanon! Above the surface, things could make you believe that everything´s alright. The Syrian civil war seems far away when you strall along the downtown-streets of Beirut…

„All I want is peace, love and a make-up kit“ 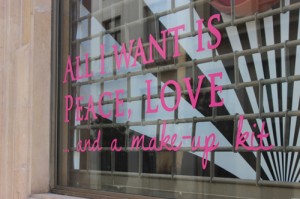 On my very first day, this advertisement really caught my attention. There were three of them and they  looked like a tryptichon for the shopping-community, a modern survival guide in times of distress. A couple of blocks further south, I ran into an outdoor fashion shooting on the private property-grounds of Saint Georges Yacht Club. And I witnessed the making-of a glamourous wedding film close to the financial district. People in Lebanon go on with their everday-lives, of course. If it wasn´t for the Syrien refugees that you see on Hamra Street, selling flowers and polishing shoes, or the anti-war graffitis on Beirut´s public walls – you could easily forget that there is a bloody civil war raging just behind the mountain-range. To look underneath the surface, it sure would help to speak with a local colleague! 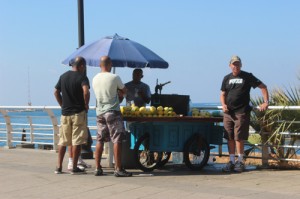 Since there is no Hostwriter-network yet where I could easily get in touch with other journalists,  my first contacts in Beirut happened by coincidence: The next day, I received a call from my German colleague Sabine Rossi (who got my phone number from a journalist who was also a Middle East Fellow in Lebanon and thus knew I was here). We met for a drink in Gemmayzeh, a fancy Christian quarter that attracts international hipsters – and us! – and when we went outside because the music was just outrageously loud, we happened to meet two German expats who told us about a rather famous Lebanese driver. 48 hours later, we sat together in a van driving south, through a Hezbollah-controlled area that is `safe´ when you travel with someone local who knows his way around.

„Damascus? Tripoli? I can take you anywhere!“ 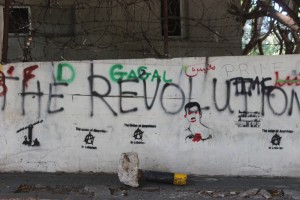 The driver, let´s call him Mr X, gets hired by a growing crowd of international journalists who he takes to the „hotspots“ of war: „Damascus? Tripoli? Baalbek? For $100-$150, I can take you anywhere“, he let us know. Mr. X sees himself as a businessman, he has close ties to both sides of the civil war. However, when I asked him whether he himself was Sunni, Shiite, Druze or Christian, he didn´t like to give me an answer. I´ve only been here for ten days and cannot be sure about this – but from my understanding, sectarianism is so predominant in Lebanon that there is no place „outside“ this conflict that runs along sectarian lines. As a journalist, it plays a role whether your driver is a Christian or a Muslim and it´s hard to believe that this won´t have an effect on the way you report.

„Speaking of this part of the world…“ 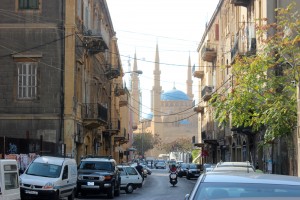 Meeting Mr. X once again made me think about how tricky reporting in foreign countries sometimes gets. Sure, there are great journalists out there doing an amazing job – but a lot of times, especially in the Middle East, it´s also adventure-seekers dropping by just for a couple of days to catch a story they already made up in their heads, barely confronting their ideas with the realities on the ground. Or working for editorial teams back home who pressure for the next headline. As foreign journalists, we might manage to get from A to B, but unlike local journalists, we often miss the larger picture and might not understand how our stories get influenced – let´s say: by a driver who happens to be a Druze. In this country, it makes a difference. 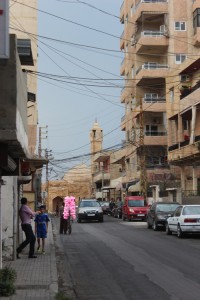 A Lebanese colleague wrote to me that common suggestions about the Middle East really anger him. When I asked him for an interview, this is what he wrote back to me: „Speaking of this part of the world and the misconceptions on it caused by an ill informed reporting, as a fixer and a journalist I’m totally looking forward to learn from you on the Hostwriter.org project. I’m always excited when I learn about similar initiatives as the way information access and journalism are both drastically starting to change.“ I´m really looking forward to our interview tomorrow – and of course we will keep you updated about what he said on this blog!!