Tipsheet: Key Lessons from Reporting on the Jeffrey Epstein Scandal 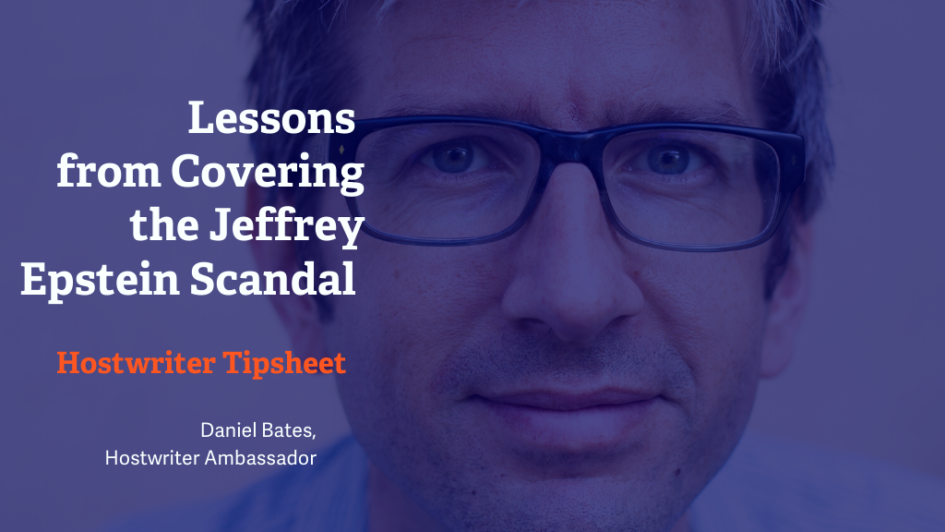 One of my first bosses once said to me “you are always learning on this job,” and covering the Jeffrey Epstein case, that was certainly true. I have stuck with this story for years, doing investigations, podcasts, TV shows and dozens of news stories. As a result of my work, Prince Andrew from Britain’s Royal family was forced to defend himself in a BBC interview against claims he had sex with one of Epstein’s victims three times. The interview was a car crash and went so badly that he was forced to retire from public life. Here are the most important things I have learned from covering this story:

If you keep asking questions, then you’ll keep getting stories. With Epstein, there are so many questions, like what the hell was Bill Clinton doing hanging out with him? What motivated Bill Gates to have a friendship with Epstein after he came out of jail and became a registered sex offender? A good trick I find is to look at my reaction and then think: Why? Why does this make me angry / upset / intrigued? Then I follow my nose.

If you get your hands on a document, sit down (in my case, it’s usually with a cup of tea) and read the whole thing. By that I mean everything, especially any footnotes. When thousands of pages of documents were released about Epstein last year, one of the last was a manuscript of a memoir that a victim had written, which described her movements on a trip to Europe with him. From that, I worked with some picture researchers and came up with this set of photos, which happened to capture the victim on the French Riviera while being trafficked by Epstein. It was only by being thorough with the documents that this worked out.

If you work on a story long enough, you should know your material inside out. This story was as a result of knowing what this person had said in multiple previous interviews and seeing that there was a little new detail. When a new set of flight logs for Epstein’s private plane were made public, it resulted in this story, because we could use the newly available material that wasn’t there before. When I read documents or stories about Epstien, I can now see what’s new, what’s recycled and what might give me an idea for a story. I have a degree in Jeffrey Epstein, for my sins – unique knowledge that makes me a valuable asset for any editor. As a result, I was interviewed by this podcast, which later hired me as a consultant. I also was interviewed on an ABC News podcast about the case.

Put Your Records Requests in Early

A really, really good tip, which I have not followed on this story! Now that I have finally got my act together, I’m eagerly awaiting the results of some very focused records requests. Others have been better at this than me, which resulted in very strong stories.

Keep in Touch with People

I have built up relationships with victims, lawyers and campaigners by covering this story over time. Some of them have become my friends, and I’m grateful to know these people. At my core, I think the Jeffrey Epstein story was a betrayal of justice, and I share that point of view with his victims. Take time to talk to people about other stuff than the work, and build up a proper friendship with them. It may feel a bit fake at first, but if you have a shared interest, then build on it and see what happens. At the very least, you’ll have a warmer working relationship.

Personally, I hate self-promotion, but I’ve found it useful to send contacts your stories so they can see you’re still working on the case. Don’t assume they are reading as much as you; assume they’re busy and probably aren’t (which is most people!). People in positions of power tend to love it when their names appear in your story, so why not make them feel good about themselves?

Covering the Epstein case has taught me an awful lot about sexual assault and the trauma that victims go through. You shouldn’t be afraid to educate yourself and to be honest about your lack of knowledge. In my case, what I’ve learned has definitely made me a better journalist.