“We want to change the Mass Media Image of Refugees” 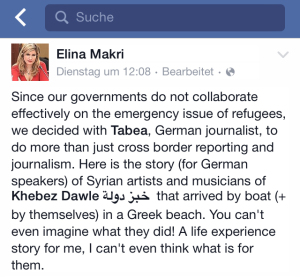 This is how Elina from Athens described our spontaneous cooperation last week: „Since our governments do not collaborate effectively on the emergency issue of refugees, I decided with Tabea, German journalist, to do more than just cross border reporting and journalism“. I can only agree. It was more than journalism and maybe that’s why it touched me so much. It is the outcome of a last-minute collaboration between Elina and I, a Greek-German cooperation made possible through oikomedia and hostwriter. A story that has opened my eyes for what is possible when you can reach out to colleagues worldwide, anytime, anywhere.

In 2013, I spent two months in Lebanon researching the Syrian community of artists who had taken refuge in their neighbouring country. Two weeks ago, I found out that the musicians from the Syrian band „Khebez Dawle“ had fled, risking their lives on their way to Europe. My first response wasn’t of journalistic but of human concern: I got in touch with Elina in Athens and asked her for help. We have been in touch since she founded a platform similar to hostwriter in Greece called „Oikomedia“ that shares our vision of cross-border collaboration in journalism. I felt incredibly relieved when Elina assured me she would get in touch with the musicians and meet them. 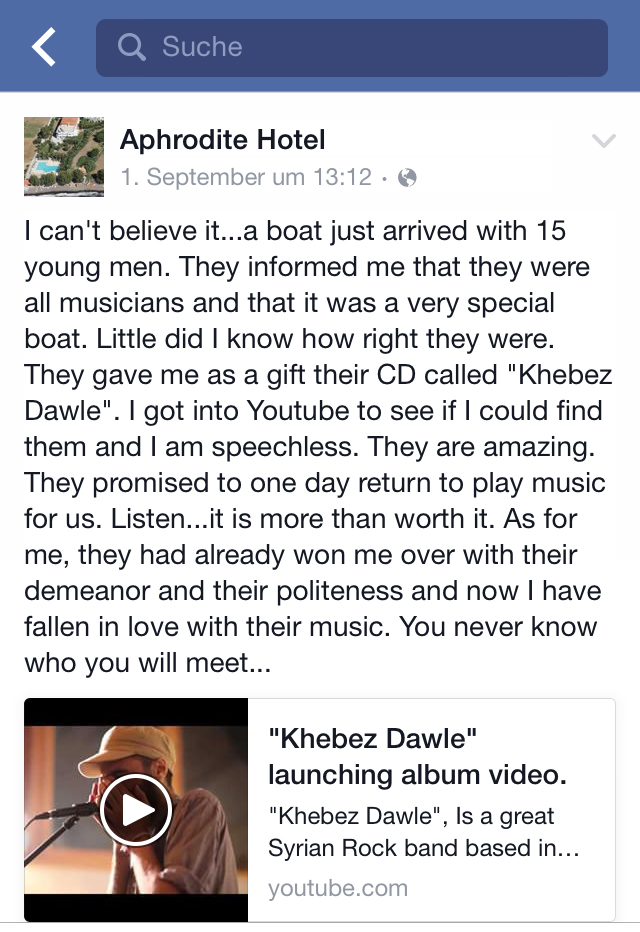 It was only when I discovered Ana‘s Facebook post about the circumstances of their landing on the shores of a hotel beach that the idea for a journalistic collaboration presented itself: The first thing the musicians did on Lesbos island was to hand out their new CD to tourists tanning on the beach! Can you imagine?

The Syrian musicians are still on their way to Europe, Lesbos was only the beginning and their escape continues. I hope that our story supports the musician’s intention to „change the mass media image of refugees“ by showing that refugees are always individual people with individual hopes and dreams and sometimes a message to the world. I hope we can fight against a mass media representation that dehumanizes men women and children into „refugee floods“ and reduces a global problem of inequality and injustice into a temporary „refugee crisis“ on the doorsteps of Europe.

Dear Elina neither the support, nor the reporting would have been possible without you. Thank you as a friend and as a journalist! This is the link to the story that was published at the German National Radio/Deutschlandradio Kultur on Sept. 7th, 2015. Please find the English version below. 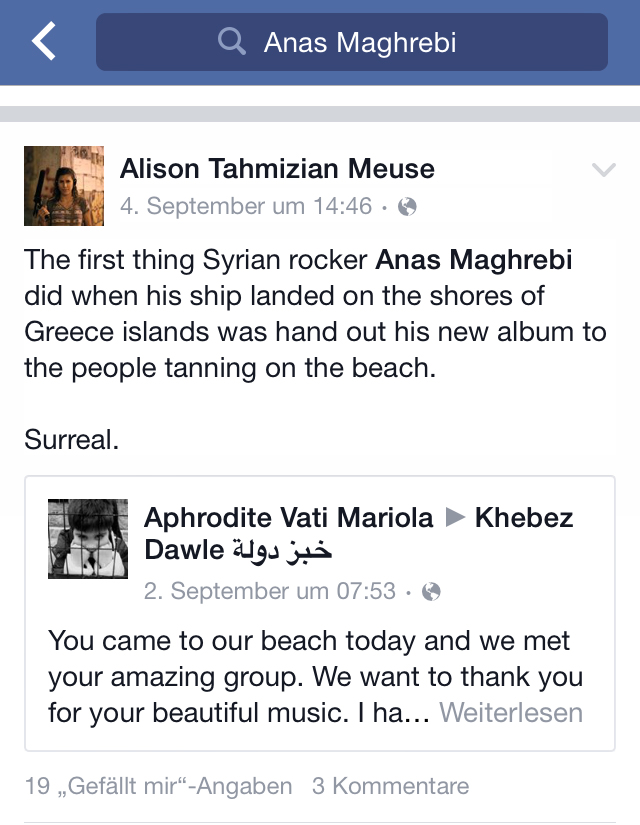 When I discovered the posts from Greece on Facebook I could hardly believe my eyes. My Syrian friend Anas had shared them, a group portrait from the Greek island of Lesbos together with this commentary from the Greek hotel owner on whose beach they had landed:

I can’t believe it…a boat just arrived with 15 young men. They informed me that they were all musicians and that this was a very special boat. Little did I know how right they were. They gave me as a gift their CD called “Khebez Dawle”. I got into Youtube to see if I could find them and I’m speechless. They are amazing.

I send a message to Anas – what are you doing on Lesbos, are you ok? Are you the one who distributed CDs to tourists? A couple of hours later, my dear colleague Elina Makri meets Anas for an interview. She records Anas’ answers with her mobile phone and sends it back to me:

Anas is singer-songwriter of the Syrian band Khebez Dawle, “State bread”, the name refers to the government’s bread subsidies in Syria. During my research grant in Beirut in 2013, I had a chance to see them play twice; the musicians are known, they made a name for themselves with Arabic Progressive Rock music. In their songs, they keep the events of the Syrian Uprising alive, a collection of snapshots from Syria from a humanitarian point of view. It’s important to Anas that they are seen not just seen as refugees but as musicians with a message to the world. He doesn’t recognize himself and his friends in the news footage about Syrian refugees.

For example, a place where he can work in safety, as a musician with his friends? It already became apparent in late 2013 that Beirut could only be a whistle stop on their escape. Too close was the war in Syria that carried forward into neighbouring Lebanon underneath the surface, explained Anas backstage before a concert two years ago:

“Beirut is a little scene of what’s happening in Syria. You find supporters of the regime and the other side. There is Hizbollah and the Amal-movement against salafists and so on. Everybody has extreme opinions, they are either for or against the regime. As a Syrian, people ask you a lot of questions in Lebanon, eyes follow you through the streets and ask you: Where are you from? Yes, from Syria, but from which city? They know exactly which city is for or against the regime. It’s not as free here as it looks.

After two years in Beirut, two band members faced a dilemma. Their passports had expired but a return to Syria wasn’t an option. Their escape continued, through Turkey to Greece. Anas sends a text message: Don’t worry about us, we’re going thru all what our people are going thru. And we’ll prove to the world that we’re not just „refugees“. We’re gonna get to Europa and continue our career and make people listen to our country’s story. Wish us luck, my friend.

I listen to Elina’s recordings. He adds:

TODAY’S UPDATE: Anas and his band members are still on their way. Today afternoon, September 16th, he gave an interview to  BBC World Service News from Croatia.