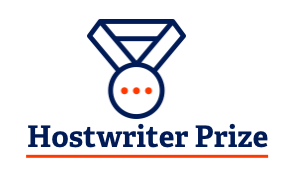 Investigating the EU-Turkey deal on the ground 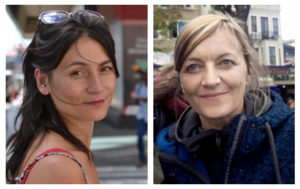 Lorraine (left) is based in Edinburgh and Nathalie lives in Istanbul

In April 2016, the EU began deporting refugees from Greece to Turkey. The controversial transfers were part of a hastily agreed EU-Turkey deal intended to manage the massive influx of migrants making the perilous journey over the Aegean Sea into Europe.

Edinburgh based reporter Lorraine Mallinder decided to cover the deportations. Using Hostwriter, she connected with photographer Nathalie Betrams in Istanbul. Nathalie put Lorraine up in her Istanbul apartment and together they researched the story before heading to the coastal town of Dikili, where the first deportees were arriving.

“Together, we managed to cover what turned out to be a pretty opaque and complex story. The combination of Nathalie’s expertise on the refugee crisis and Lorraine’s experience of on-the-ground reporting made us an extremely effective team, able to move fast to capture the essential elements of the story.”

You can read their story on Al Jazeera

Living in the death zone & the Chernobyl baby 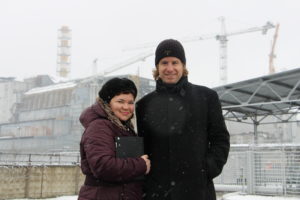 Tetyana and Claus in front of the infamous reactor

Tetyana Ihnatenko and Claus Hecking found each other on Hostwriter and co-authored two reports about the death zone, the area around Chernobyl, for the German weekly DIE ZEIT.

After the nuclear catastrophe in 1986, the Soviet military evacuated all the inhabitants from this area. But later, more then 1,000 people returned and stayed. It is a basic and sometimes lonely life for the so-called Samosely without running water, public transport and internet, but most of them say they’re happy. They would not want to live anywhere else. Read the story here.

Tetyana and Claus also researched and wrote another piece about about the “Chernobyl baby”, the only child who was born (illegally) in the zone after the disaster. Read the story here.

Dreamland Europe? Many Bangladeshi refugees wish they had never left 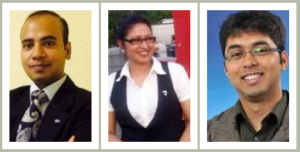 The three Bangladeshi journalists Riazul Islam, Mir Zabeda Yeasmin and Hossain Abdul Ha co-authored a piece about the long and risky journey Bangladeshi refugees face on their way to Europe. Once arrived many end up regretting their decision to have left.

Together they researched and conducted the field work and also eventually co-authored the story by exchanging writing samples, photos and ideas.

“Through this joint work we have learnt many aspects from each other. We expressed our personal opinions and exchanged views on different focuses of the report and topic. We have got many new subtopics for further research and investigation and produced many more reports on these issues in the days to come.This report came out much better than any single-handed production could have.”

You can read the original story in Bengali on the blog Our Voice or the translated English version. 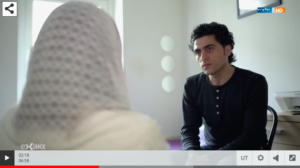 Tarek Khello in a piece for the TV programme Exakt

The messages that are being disseminated over Facebook, YouTube or Whatsapp by refugees who have ‘already made it’ often sound too good to be true. 600 Euros per month, your own flat and opportunities for good work in a stable environment. The only problem is, more often than not they just aren’t true.

The Germany-based journalism tandem Tarek Khello and Christian Werner co-produced a television report and a radio feature outlining how the problem of how online myths often fuel false hopes and even make people from secure and stable backgrounds leave their homes to try and make it in Europe.

You can watch the TV piece for MDR here and read the script of the radio report for Deutschlandfunk here.

Barcelona’s “Children of the slums” before Olympia 1992 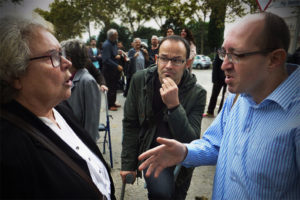 Oscar (middle) and Jesus (right) during a Memorial event in Barcelona

The book “Children of the slums” sets out to dignify the life of people and a place. Reporter Jesús Martínez and photographer Oscar Dhooge collaboratively collected the experiences of people who were born in the pre-Olympic slums of Barcelona.

The book gives numerous accounts of people who saw their whole boroughs demolished in preparation for the 1992 Olympic Games in Barcelona and records their subsequent feelings of rootlessness.

“Thanks to Hostwriter. I think it’s one of the most perfect tandems I have worked with. As a multimedia team, Jesus and I (Oscar) were perfectly matching. As he focused on the interview interventions and the human approach, I could work freely to capture the images, video and photography.“