The future of journalism – Trust will not rebuild itself 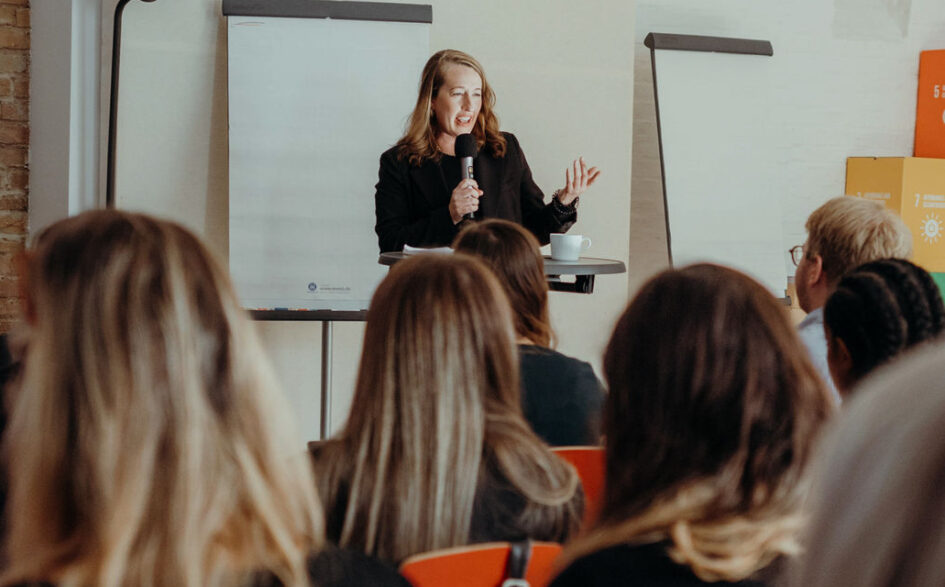 “What is our job – just to be a witness to the end of the world? Or to rethink the way in which we live our lives, and probably somewhere, build a world that works, for us, a world that heals what is broken, a world that is able to fashion solutions that do not in the long run destroy us. So how can journalists better serve the public and the communities they report from? What does the listening we talk about truly mean?

On the 30th of September 2022, Hostwriter hosted a public event on Shrinking civic space, new media, democracy and the future of journalism.

Joined by representatives from media organizations and five universities based in Europe, the event closed a five-day training for international journalist students in the framework of the Newsreel 2 project. The program was opened by Tina Lee, Editor in Chief of Unbias the news, with a passionate keynote speech, outlining how journalists are seen as a threat to right-wing narratives, and how collaboration across borders is crucial in contextualizing events. The program focused on how journalists cover communities, representation, citizen journalism, and the role of journalism as a watchdog in society.

For our first panel ‘Free the Newsroom‘ Zahra Salah Uddin from Hostwriter, moderated the session and welcomed Ariam Tekle from Black Coffee Podcast, Sonia Nandzik-Herman from Refocus Media Labs and Anna Dotti from New German Media Makers (NDM). They provided insight into how their work contributes to creating safe spaces in media, and how the fast-paced mainstream media fails in conveying human stories beyond breaking news.

When talking about experiences in the field, Dotti shared some of her experiences as a migrant journalist coming to Germany from Italy and facing structural barriers. She highlighted the importance of networking with other journalists, which she was able to achieve through her organization, the New German Media Makers. According to Dotti, networking has been helpful in getting a foot in the door when when reaching out to editors for work. The panelists discussed shortcomings in current media coverage and what steps we as newsrooms and journalists can take to ensure respectful reporting. Nandzik-Herman pointed out that traditional newsrooms are hard to change, and that young journalists are more likely to bring the change needed in the information landscape. Tekle highlighted the importance of creating safe independent spaces to tell stories, especially for groups underrepresented in the media.

“Journalists have the power of changing the reality. It is difficult, it is very difficult, but if you have the attention as a journalist, of either your followers on social media or in your newspaper, you have to be aware that with this power comes responsibility.”

The panel led up to an introduction by Yaser Taheri to the screening of the film “Nothing About Us Without Us“. Taheri is also one of the protagonists in the documentary and he shared his experiences about what it was like to film at the Moria camp.

The film serves as a call to action for mainstream media to develop a new standard of engagement with the communities they report upon. The documentary was written, directed and edited by Yaser Akbari and Nazanin Foroghi. It was filmed by citizen journalists from ReFOCUS Media Labs chronicling the past two tumultuous years of the struggle faced by asylum seekers and refugees before, during and after the fires that destroyed the Moria camp.

The film screening was followed by another panel titled ‘New Trends in Journalism,’ during which we had the pleasure to welcome Marija Ristic from Balkan Investigative Reporting Network, Anneleen Ophoff from Are We Europe and Mercy Abang from Unbias the News. From outlining new trends in journalism, the talk progressed to crystalize how the commercial pressure on the media sector threatens its ability to fulfill its watchdog function in society, and how this is one of the root causes of the eroding trust.

When talking about new trends, Ophoff pointed out the importance of print journalism, citing the “Are We Europe” monthly magazine as a case study, to talk about how it is still meaningful for readers despite new media trends moving towards an overload of digital content. Ristic, however, shared insights and experiences regarding the struggles of presenting specific stories according to the latest media trends, especially investigative pieces. Abang commented on commercial media, which often lack the incentive to pay attention to complex issues that concern the public. The role of journalists is to play the watchdog role of society and hold power to account. When the media no longer provides its watchdog function, it is performing the function of the paymaster.

“I know by heart five journalism conferences this year who talk about a failing trust in the media, it comes from readers, governments and funders who argue that if nobody trust you anymore, we are not going to fund you – but what do you expect will happen, when you turn journalists into businessmen?”

Anneleen Ophoff, Are we Europe

Earlier in the day, we showcased the E-learning platform of Newsreel 2, with presentations by University of Pécs, Erich Brost Institute for International Journalism, ISCTE-University Institute of Lisbon, Faculty of Journalism and Mass Communication at the University of Bucharest and the Department of Media Studies and Journalism at the Masaryk University.

The participating students presented their projects, Transitioning to wind energy or just rambling about it?, Infectious Project – How COVID-19 became an infodemic, Journalicity.project, Beauty Check and Tiktok made me buy it.

The evening came to a close with an inspirational speech by Nigerian author and satirist Elnathan John, in which he illuminated the audience and reminded everyone about what our role truly is as journalists and what we can do for the betterment of the societies we represent. Following the speech, the night ended with a performance by Pakistani singer-songwriter Sameen Qasim which had the audience singing along.

This event took place in the framework of the project: New Teaching Fields for the Next Generation of Journalists | 2020-1-HU01-KA203-078824, funded by the Erasmus+ Program.