5 Things to Keep in Mind before You Write that Pitch 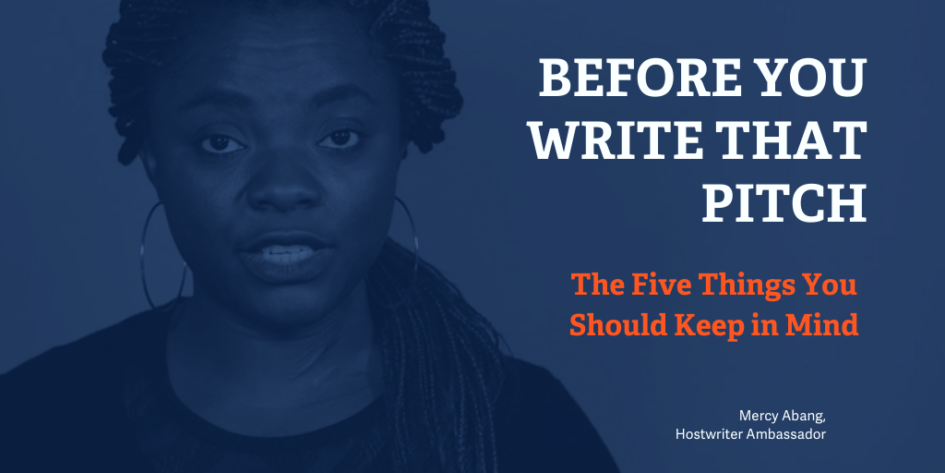 When telling stories, journalists often stay on the popular narrative, and like editors, freelancers and stringers, gloss over other deeply important and yet underreported angles of the same story.

Too often, what’s reported dictates what matters, leaving out key versions of how individuals and communities are left without a voice of their own. Ironically, however, it is sometimes the reality that those underreported stories go beyond the front pages and headlines – these are the stories that dig deeper into the lives of marginalized populations. These stories are the ones that directly concern, educate, influence and shape policy actions, especially in times of conflicts.

News as we know it is now focused on those who are perceived to be influential. In many cases, the government and its role players. Millions of newsrooms would rather assign journalists and have them stationed at the United Nations Security Council in New York than deploy them to Myanmar, where the conflict is actually taking place. But it does not matter where a journalist is stationed to tell a story, what’s important is how they look beyond the headlines. How you ask yourself: What is the underreported story here? And before preparing for the next story: What is the underreported angle of this story that needs to be told?

It is easy to get carried away by the buzz of clickbait, the breaking nature of news and the often intentional distractions carried out by political actors – leaving aside people/persons within our societies whose stories we should equally be telling. Here are some tips to keep in mind:

1. Go beyond the headlines.

Going beyond what the front pages and headlines are saying gives a journalist more room to pay attention to sectors like healthcare, infrastructure and living standards. An example of this is when reporting on wars, insurgency in places like Syria or the consistent hold of Boko Haram focuses on killings, beheadings and sensational attacks or government responses – ignoring the human cost of these events.

Catchy headlines can influence journalists in such a dynamic way that some are unable to keep asking critical questions. The dramatic events between President Trump and President Erdogan of Turkey lead journalists to ask less abouthospitals in Syria, or drugs, or doctors. In telling these kinds of stories, the journalist does not only capture the issues but should also be drawing the attention of organizations like Doctors without Borders or the United Nations Humanitarian Commission for Refugees (UNHCR) to the immediate needs of a certain number of people in these regions.

Humanitarian Crises are some of the world’s most underreported stories, from Rohingya refugees to the millions of displaced persons in camps across Northern Nigeria, Cameroon, Chad and Niger, all displaced by Boko Haram terrorists. Some media organizations now have sections for  humanitarian crises, but a lot more can be done to better capture the depth of refugees streams.

Critical news reports about the plight of Turkish refugees migrating to Greece have been downplayed. It is a clear situation where children are in need of immediate medical attention. Beyond the news of the Syrian crisis, this reflects the suffering of people who require urgent attention. In a 2018 report, the United Nations Refugee Agency highlighted a number of humanitarian crises around the world that rarely made the news – from North Korea to Eritrea and Burundi.

This context is especially relevant for Africans. Before I step out to send a pitch for a story, I always ask myself, what are the taboos in this community? I use the word “taboos” for context. In Yourdictionary, “A taboo is an activity that is forbidden or sacred based on religious beliefs or morals.” Ensuring to respect local and cultural boundaries is an important aspect of reporting with human consciousness. But it is far more useful to also understand when local practice violates fundamental human rights. There are some disturbing examples. In certain communities in South-East Nigeria, a baby suffering from cerebral palsy is locally assumed to be a victim of Black Magic; and, in particular: money rituals. This local belief affects the functionality of inclusive social development programs. You can read more about this in my publication: A Superstitious Link Between Dark Riches And Cerebral Palsy Is Hurting Nigeria’s Children.

Stories about human rights violations against vulnerable populations – malnourished children, abused women, trafficked young girls – are stories that should create local and global outrage, enough to end such practices. In Nigeria, the law criminalizes same sex activities and other forms of relationships within the LGBTQA community that are common in other parts of the world. This means that members of the queer community live in fear and anxiety around their own sexuality. As an African or Nigerian journalist, this is an underreported story that deserves to be reported. Find out how it feels to be queer in Nigeria. People in this community and their challenges should be heard.

Another example of such a story is new moms who get detained in hospitals because they’re unable to pay their medical bills. Have in mind that Nigeria is a signatory to the Universal Health Coverage that allows pregnant women and children under five access to medical bills. This is an underreported story and deserves media attention. In the U.S., there’s the issue of a broken justice system that automatically leaves ex-convicts completely useless to themselves and society. Looking to issues faced by the most vulnerable often points to larger underreported societal issues.

5. Put people at the center of the story.

Human angle stories or human stories offer the most compelling reads. These types of stories are about my all-time favorites, because journalists have the opportunity to put a face to a number and make distant events relatable to their readers. I find Andrew Brookes’ description of human interest story apt, and I’d like to share his thoughts: “These stories put people at the heart of the events. Doing this brings a two-fold benefit. It gives the reader someone to relate to and taps into our natural curiosity in the lives of others. The emotion of others can raise awareness of worthy causes and help people to realize the real human impact of a whole host of issues, ranging right up from local politics to war and everything in between.” These stories also, at a simple level, “can give readers something fun, amusing, emotional or thought-provoking to engage with.” Having more information through inclusive reporting of such events will help more challenging societies evolve.