Experiencing Cross-Border Solidarity among Journalists: An Interview with Ludovica Jona 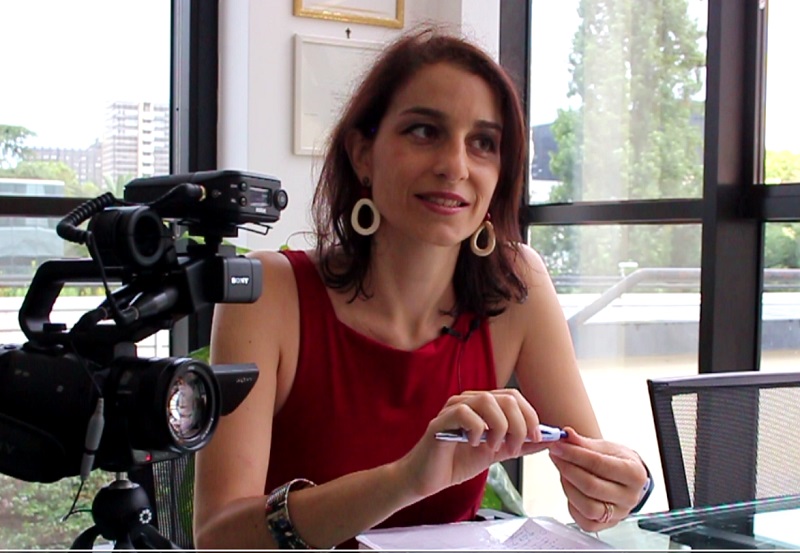 Journalist Ludovica Jona and her team – Caitlin Chandler, Chris Jones, Petra Sorge and Giacomo Zandonini – won 1st Place for the Hostwriter Story Prize in 2019, for the story “Invisible Borders.” The journalistic piece focused on European Union (EU) investment in the use of biometric authentication (fingerprints and facial recognition technologies) for border control purposes despite the skepticism of experts.

In this interview with Bernadette Geyer, Hostwriter’s Head of Communications, Ludovica talks about how her team used Hostwriter as part of the process of putting together their story and offers tips for journalists who are interested in collaborating across borders.

BG – How did you and your team initially come together? Had you ever worked together on a story before?

LJ – We presented the project “Invisible Borders” to the Investigative Journalism 4 Europe grant (#IJ4EU) as a team of thirteen people, journalists and video-makers, from 5 different countries in Europe, America and Africa! At that time, I personally knew only three journalists from the team, and had worked with only one of them. Having an idea for the investigation, I looked for other team members among authors of articles related to the story I wanted to tell. In this way, I could be sure that they were already experts and interested in the topic, which is very important. The Hostwriter platform, which allowed us to find journalists by expertise and by the countries in which they are based, was very useful in finding the right team members!

BG – How did you all come up with the idea for your story?

LJ – Our story “Invisible Borders” investigated the use of biometric technologies in the EU’s migration control policies. It came from a fact I noticed during a previous collaborative journalism project. That investigation – “Diverted Aid” – was an analysis of the European Development funds spent on migration control in Africa. We found out that a lot of development money was spent on very advanced fingerprint and facial recognition technologies – even in countries where electrification is very low, such as Niger! I wanted to find out more about these technologies and tried to involve other journalists interested in the topic.

BG – What were some of the main obstacles your team faced in putting together this story, and how did you overcome them?

LJ – Coordinating a team of thirteen people living in different countries and involved in different journalistic jobs is very challenging. For this reason, we had to create subgroups focused on different investigation subjects. We had geographic subjects – such as Senegal, Mali, Niger – and thematic ones, such as the interoperability of databases in the EU, Freedom of Information requests, along with the role of the International Organization for Migration (IOM) and Frontex (the European Border and Coast Guard Agency) organizations. The Slack platform was very useful as a way to organize the work and the exchange of documents at the beginning. At the end, only a smaller group of five journalists decided to continue the investigation – thanks to a new grant we obtained from the Otto-Brenner Foundation – and at this point, a mailing group was enough. But the richness of the investigation was due to all the team members: Petra Sorge, Giacomo Zandonini, Chris Jones, Laura Arago, Andrea De Georgio, Luca Pistone, Moussa Aksar, Alessandro Nota, Francesco Bellina, Simona Cocozza, Caitlin Chandler, Ryan Callagher.

BG – How did you and your teammates use Hostwriter to help you with the story?

LJ – Hostwriter was useful in finding our team members, but also in finding a fixer working at the Serbian-Hungarian border, which helped me in the testing of the biometric “truth machine” funded by the EU. This was a very important part of “Invisible Borders” investigation. It was not easy to find a journalist working precisely there! So I wrote to all the Serbian journalists registered in Hostwriter, and one of them who lives in Berlin had a friend working exactly where I was going. They both were very helpful and efficient, and it was great to experience cross-border solidarity among journalists!

BG – What are your top tips for other journalists who are working together on a cross-border investigation?

LJ – I read somewhere that small groups are easier to work with. Maybe, but big groups can make the research a lot richer … so don’t be scared. Just be very clear from the beginning about the roles, the duties, the rules and the fees. And regarding the investigation, it will happen that something doesn’t go as you initially expected. Use it as an opportunity to search for other ways to dig. Enjoy the research and enjoy the team!

You can read “Invisible Borders” at this link.