Unbias The News at the European Press Prize: “Activists for quality journalism” 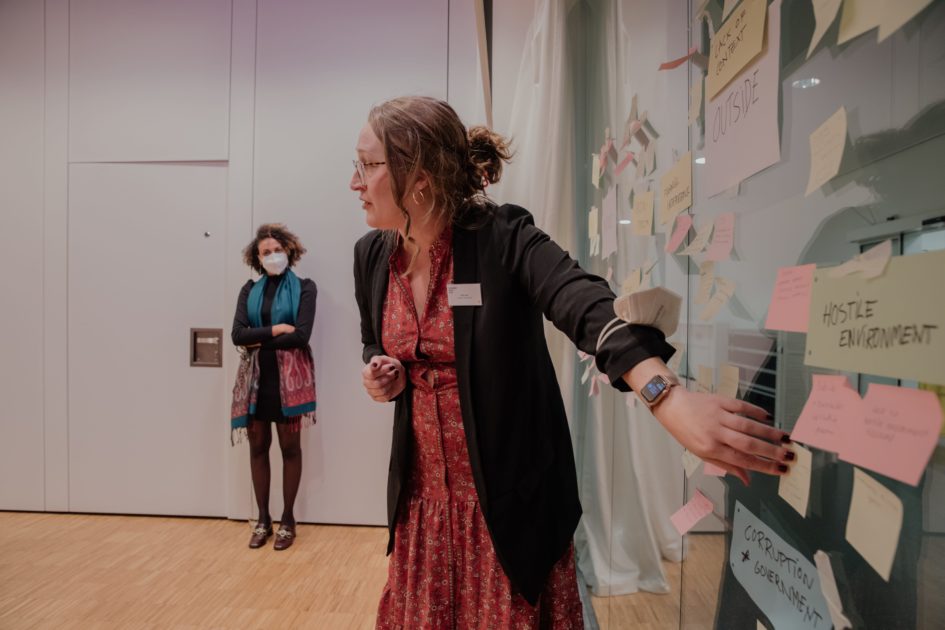 Not many of the journalists and media workers attending the workshop offered by Hostwriter at the European Press Prize 2021 kept sitting when they were asked to stand up if they consider themselves privileged compared to their colleagues when it comes to facing press freedom issues and other threats inside and outside the newsrooms. Actually, only three or four out of almost 40 participants in the room kept their seats.

This simple exercise reminded us of all the work still needed to change the actual panorama and hostile environment that journalists across Europe and the world are facing on daily basis.

How “biased” is your newsroom? This was the first question Hostwriter’s crossborder newsroom Unbias The News brought to the interactive workshop held in Berlin as part of the European Press Prize, which awards excellence in European journalism. Together we reflected on the main threats inside and outside the newsroom and started to rethink our positions in order to work towards a more equitable and inclusive world of journalism from each of our newsrooms.

Racism, sexual harassment, discrimination, gatekeeping, lack of diversity, financial dependency, biased editors, visa issues, and lack of knowledge and journalism training were part of the main topics that the journalists in the room have experienced and brought to the discussion.

Such topics are not far from reality. Indeed, without going too far, in Germany, a study conducted by Reuters Institute and the University of Oxford shows that 0% of top editors are non-white. Additionally, another study ‘Diversity in German Journalism’ by Neue Deutsche Mediemacher*innen demonstrates that in Germany, where 1/4 people have a migrant background, only 6% of editors do.

“People of color, especially black people, and immigrants are bullied, harassed, pushed out of the journalism field, paid less…” said Unbias The News Editor-in-chief Tina Lee while highlighting the Editorial Manifesto of our remote cross-border newsroom, which looks to create a space for journalists who are often marginalized on the basis of their ethnic origin, gender, disability, class, age, religion or geographical location.

On the other hand, Wafaa Albadry, contributing editor at UTN, also talked about the barriers she has faced in the field as a journalist and woman of color originally from Egypt. “There is a ceiling for journalists of color, and we need to break that ceiling”, she mentions.

“What can we learn from each other?” this was the challenge that Unbias The News posed to the journalists and members of different European newsrooms. In this section, journalists interacted with each other looking for solutions that might help to ‘unbias’ their own newsrooms and uncover different ways to make the news more equal, inclusive, and accessible to everyone.

What to do when the top editor rejects a story based on bias? One idea that came up from the discussion was to share the story with other editors and members of the newsroom before bringing it to the Editor-in-Chief. Also, using research tools to prove why the story is relevant can be useful.

Recognizing and giving a name to these barriers are the first steps to make a change, and we believe that these steps have been already taken from this day. We don’t underestimate the great additional work still in front of us, but we celebrate the awareness around these topics from now on.

After the workshop, the conversation continued, and we were asked if do we see ourselves as journalists or activists? To what Albadry promptly replied: “We are journalists who thrive for better journalism. We are activists for quality journalism”.

About 150 journalists and media workers from all over Europe got together in the capital city of Berlin to celebrate and honor innovative and quality journalism.

For Unbias The News it was such an honor to be part of this amazing event in almost two years without being able to get together with our colleagues to talk about how to make better journalism. However, it is important to remember that many of our colleagues couldn’t attend to this celebration because of barriers like the ones mentioned before. For them, we at Unbias The News continue to raise our voice not just for diversity and inclusion in the newsrooms, but for quality journalism.

Here you can watch our Instagram stories for more on the event!